HITMAN v2.0: Arrival of the Modern-Game Legend into the Test Arena 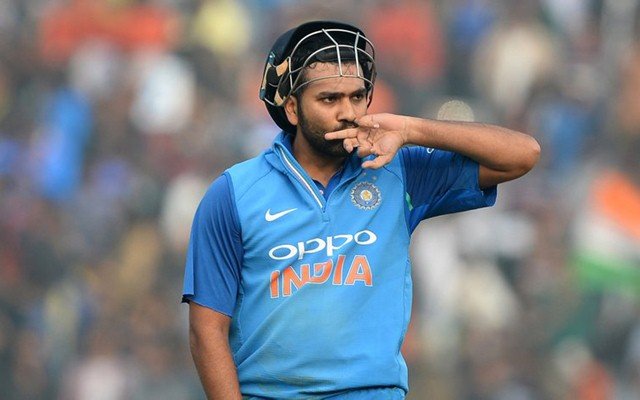 Flawless cover drives for breakfast, unbelievable scoop shots for lunch, seemingly effortless square drives for dinner and the ever-so-famous front foot pull shot for dessert are just things Hitman fans devour. The delightful sound off the blade and perhaps, the cleanest six hitting are only few of the never-ending list of admirable qualities possessed by the current Indian Vice-Captain, Rohit Sharma.

It doesn’t take an ardent cricket fan to recognise the talent possessed by the Indian opener, but often leaves even the most meticulous fans in awe all over again. The only batsman to have scored 3 double centuries in ODIs, 5 centuries in a single edition of the Cricket World Cup and four T20I centuries seems to credit his “daddy hundreds” to his mind-set before he walks in to bat. According to the 4-time IPL winning captain himself, having played in the middle order made him value the opportunity to open. A low strike rate in the first 10 overs, followed by clean hitting once he is set is a general trend, one that has ensured that the opener takes upon greater responsibilities upon himself and has proved to become a genuine match winner. 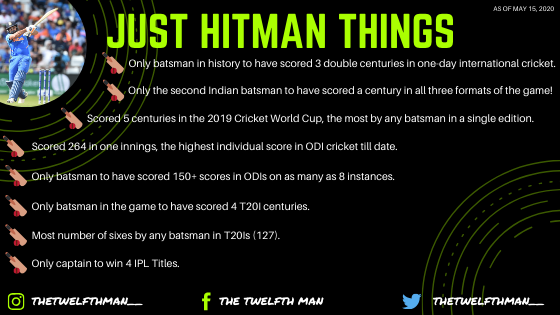 Admired for his striking abilities, Rohit believes that once he manages to bat 10 overs, no bowler can get him out, his wicket can come only through his own mistake. It is, perhaps, this approach due to which Rohit Sharma has remained unbeaten in 32 of his ODI innings, quite a remarkable record for an opening batsman.

As he approaches 10,000 runs in ODI Cricket and 3,000 runs in T20Is, it is his potential in test match cricket that is the only aspect of his game that is placed doubt upon. It is debatably the fact that Rohit is turning into a genuine test match opener that excites cricket fans all over the world. If he can come to his own self in red ball cricket as well, he is undoubtedly shaping into one of the greatest legends of cricket in all formats of the game. With the backing and support of the team management, and the go-getter that this stylish batsman is, it is in all probability that some major records are yet to be set in Test cricket as well. It’s time for cricket fans all over the world to fasten their seatbelts because Hitman v2.0 has potentially arrived.